In the course of an AlekSIS community reunion at Katharineum in Lübeck, the team and its friends celebrated a small birthday party marking the de facto ten years anniversary of the project.

Incarnation no. 1 – BiscuIT and the N@team Control Panel

More precisely, ten years ago, in 2011, a group of people at Städt. Leibniz-Gymnasium Remscheid, lead by our current co-maintainer Dominik George, initiated the BiscuIT project in an effort to provide a feature-rich School Information System for the school. As was customary throughout Dominik’s projects already back in 2011, a highly committed group of students as young as 12 years was involved in developing and supporting the platform, as can be read on page 46 of the Leibniz Year Book (Jahresschrift) 2011. 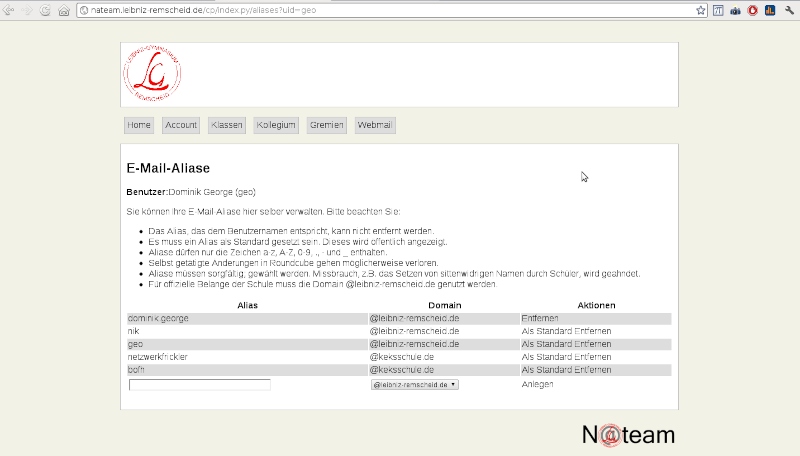 BiscuIT started out as a web interface for displaying information from the timetabling software Untis and managing user accounts for the school (thus nicknamed the “N@team Control Panel” in its early days). It quickly gained popularity throughout the school’s personnel, followed by requests to move more processes into the application. As an outstanding example, a few weeks after the project’s birth, a proprietary platform for ordering and prepaid handling in the school’s canteen was replaced with a module in BiscuIT.

A few years later, Dominik had to leave the school due to political power games. A lot of projects died with that change, and so did BiscuIT. Unfortunately, the code – although used for some months at the school until it was rewritten from scratch by one of the teachers involved in the N@team earlier – was lost.

The screenshots above are dated 11 September 2011; and an SSL certificate order receipt for a related domain from 21 September 2011 is also documented, which now convinced us to date AlekSIS official birth to September 2011. 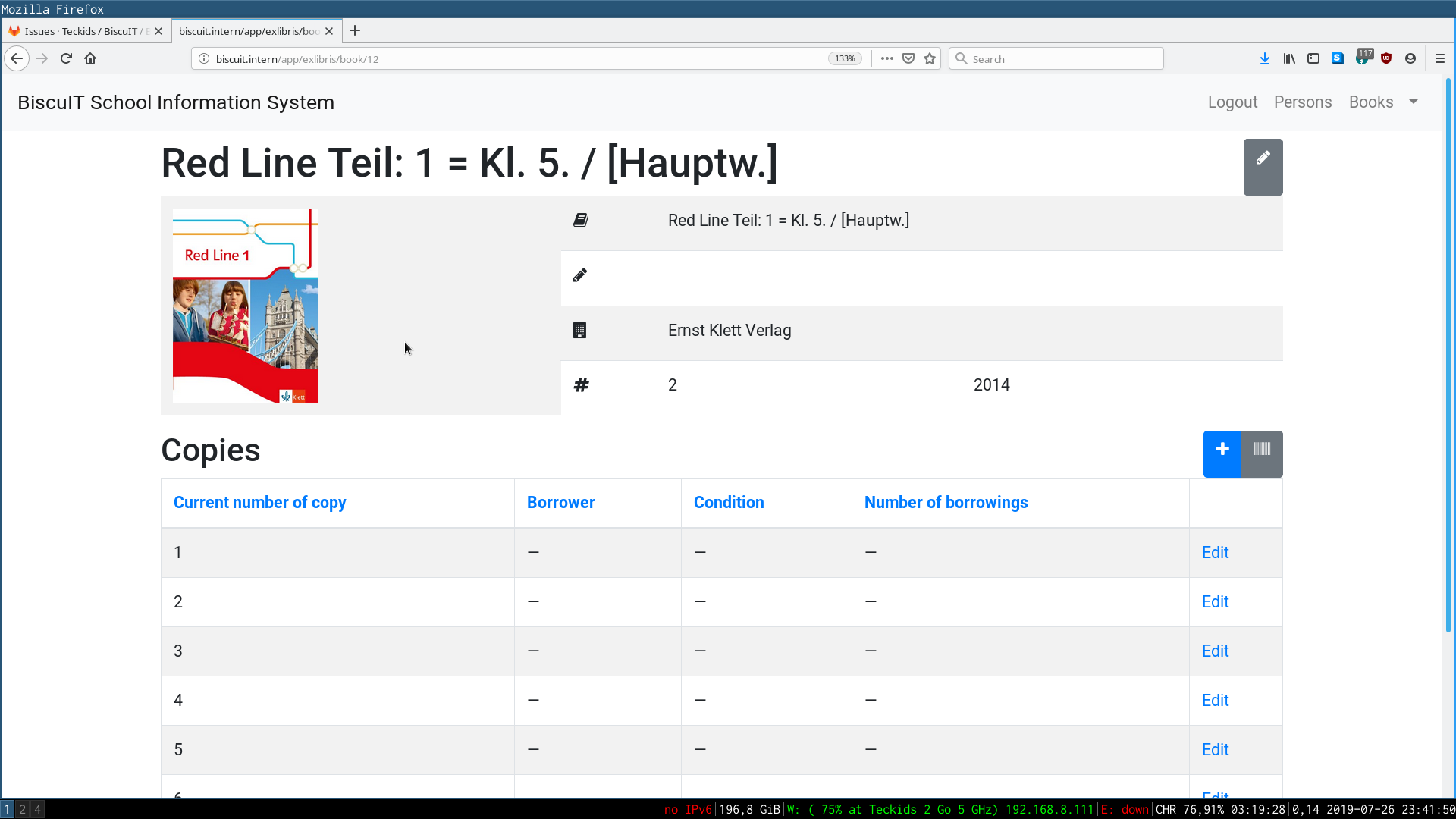 Throughout the next years, Teckids e.V. was founded and steadily increased its involvement with schools and free software. However, it took seven years until, in 2019, a second incarnation of BiscuIT was started as BiscuIT-ng, together with an associate school of Teckids in Wuppertal. The school brought in a new requirement, the digital class register, and generally was moving towards digital platforms for school management. BiscuIT-ng was chosen as a name for nostalgic reasons. BiscuIT-ng was not based on any existing code, but was created from scratch using a new technology stack based on Django and Bootstrap.

In late 2019, a networking attempt by a member of the Debian Edu school network software used at the Katharineum zu Lübeck lead to exchange between Teckids and the school. Starting in 2017, a group of students and one teacher had been working on a web frontend for Untis, much like the first BiscuIT incarnation in 2011. It quickly became obvious that the group did not only use a very similar technology stack, but also did the school share a lot of the mindset and ideas that already governed Dominik’s work at Leibniz-Gymnasium Remscheid. Student participation and collaboration between students and teachers is a general priority at Katharineum, and the groups working on the school network and software of the school share many ideas of the N@team.

A few weeks later, in January 2020, the merge of BiscuIT-ng and SchoolApps into a single code base started. Once everyone was convinced that the resulting project was what should be continued, a vote on a new name brought up the name AlekSIS, which was already proposed before the merge and turned out to fulfill all marketing and legal requirements. 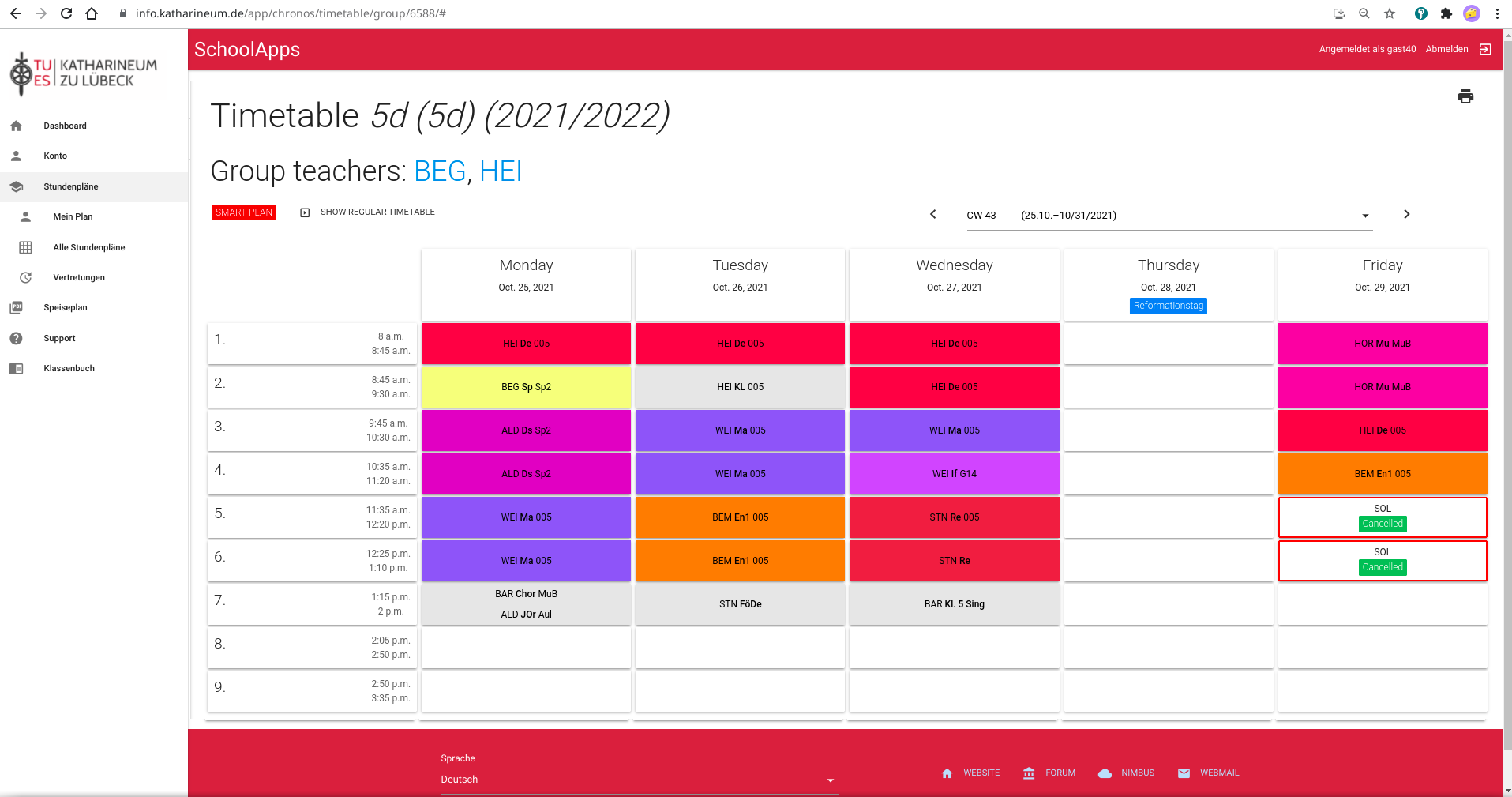 With regular developer meetings every two weeks, a few reunions in Lübeck, and various rounds of feedback from teachers and students at Katharineum, a development model ensuring some quality assurance and priorisation of issues raised during the daily work with AlekSIS was created. Originally, a first stable release was planned for summer 2020, but the COVID pandemic caused both a lot of chaos and a lot of innovation and new requirements. The release had to be postponed several times because these new requirements had to be handled with a higher priority than some long-standing release-critical issues.

Right from the start, the Katharineum benefited from another design aspect of AlekSIS: Following the history of BiscuIT and AlekSIS as well as the shared principles of Teckids and Katharineum, the software is designed to be useful in lessons as well, in that its modularity and compatibility to Python and Django text books allow creation of apps for the platform in coding classes and after-school clubs. Thanks to these principles, the Katharineum occasionally sees app projects as term papers by students, for example a project called Porta Segno, which combines open hardware digital door signage with a REST API in AlekSIS.

Now, at our most recent reunion, the team decided that all current features have reached production stability, and the AlekSIS core and current official apps will be released without pre-release suffices shortly. Another school is getting involved in the development of apps for their processes, that will be upstreamed to the collection of official AlekSIS apps. The first official distribution release will be 2021.12, codenamed “Bruner”, around Christmas 2021. Surrounding projects the team works on is tighter integration into Debian Edu, and presentational work for positioning AlekSIS in various public administrations. 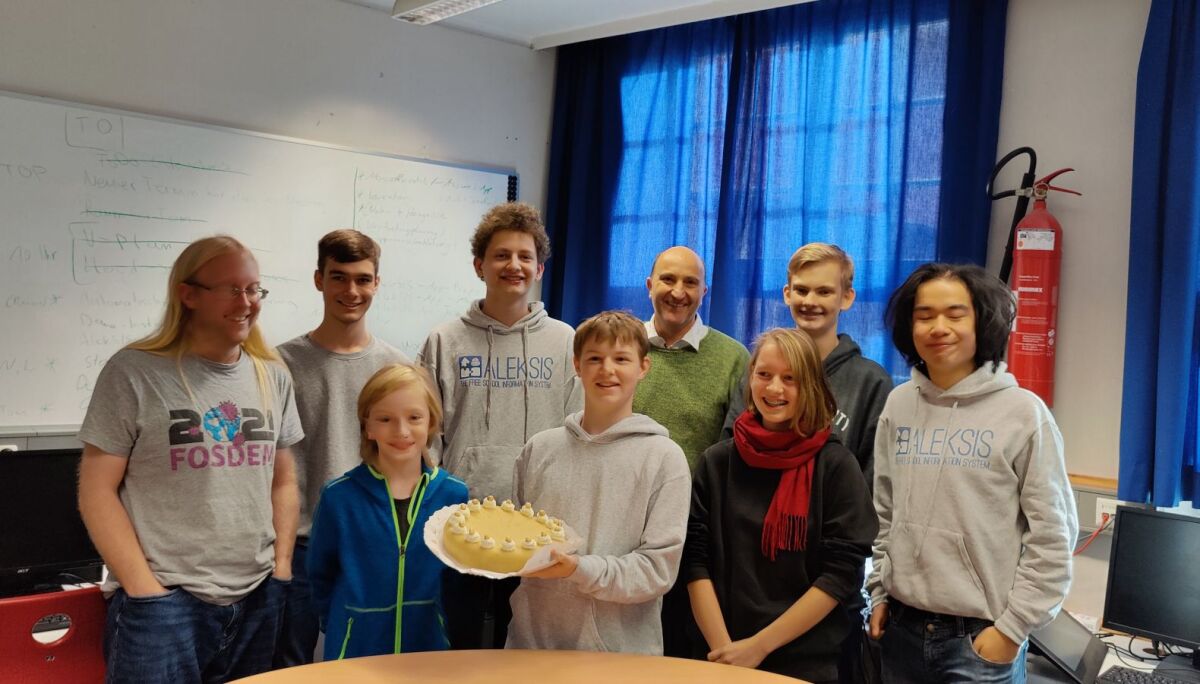 After digging in some archived materials, the group spontaneously decided to make a small birthday celebration, befittingly involving a whole marzipan-hazelnut-cake produced by the famous Niederegger manufactory.

As a present, AlekSIS was submitted for trademark registration in Germany. Recently, some companies already started to offer commercial support for the platform. By striving to become a registered trademark, the project will secure its openness and development principles in a growing ecosystem.